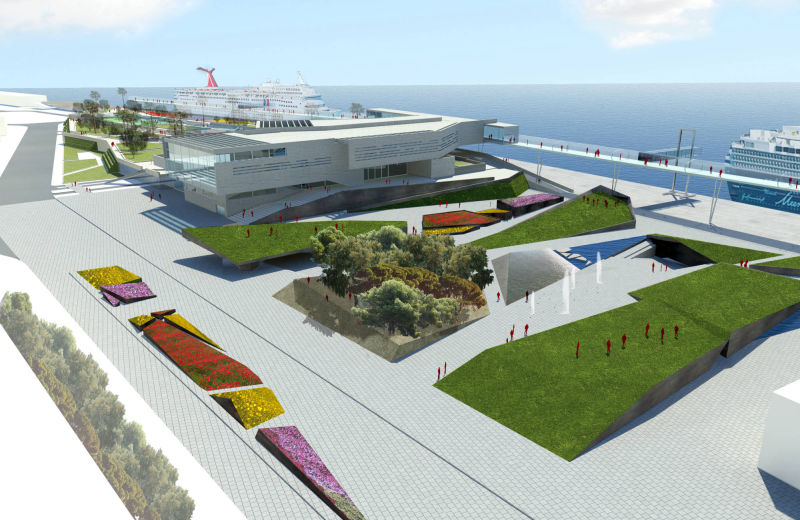 Large urban space in front of the Terminal and Customs Building with activities and views towards the Tagus River (Square);  Concentration of Vehicular movements in the North space of the Terminal; Roof of the entire vehicular area equipped with voids and patios, lighting and ventilation; The roofs over vehicles will contain a large urban park, with trails, resting areas, lawns and shade areas, sports and a bicycle road along the entire path parallel to the river; This large park will allow ample views and direct access to the River to a level above the occupation port range and its activities; Controlled arrivals to the port range at the edges of the intervention; The parallel walkway to the River is designed so that it unifies the adjacent spaces with the square, the area of the Jardim do Tabaco and the future plans of the art center and boarding of noble ships; Flow of passengers and freight entirely independent; Overpass across the length of the port for boarding and unboarding of passengers allowing more ships to operate simultaneously;

This urban space next to the Terminal represents the entrance and exit to the city for all the passengers. To emphasise this aspect a new space is generated, formed by several representative elements of the city, such as the hills, the river, the green spaces and the characteristics of a dynamic city like Lisbon. The space is organized through a series of hills covered with vegetation spread all over the square. The ground plan is excavated and extruded depending on the uses that are distributed throughout the square. There are applications that require a greater height, such as the amphitheatre or the small market, which are excavated to reach a greater height without increasing the height of the roofs. On these excavated spaces, some roofs have been designed to house an amphitheatre or a multifunctional space that can be used as a small market or shelter. The spaces between the hills will be small and controlled squares that follow a geometry marked by views of the water and the city with a river always as a background reference. This space in the city can be explored to reach the river and the Terminal, experiencing sensations that differ according to sunlight, the passage of wind and the space between the hills, traveling between areas with different temperatures, humidity and smells. Due to the large scale of the space, long views with a longitudinal axis parallel to the river are avoided and were cut with elements that emerge from the ground, but the same view is maintained perpendicular to the river in order to always keep the relationship with the water. In the hills, trees, shrubs and low vegetation are planted divided into zones according to the specific requirements of orientation, temperature and wind each plant needs. From the air, the square is a great tapestry of vegetation, water and earth. Some of the hills serve as a viewpoint to the river. This element marks its height to obtain a clear view of the water over the activities of the port. A fountain has been designed to mark the center of the square and it always serves as a reference to the broken paths. On the other side, the square is divided into two areas with water games that refresh the atmosphere in summer.